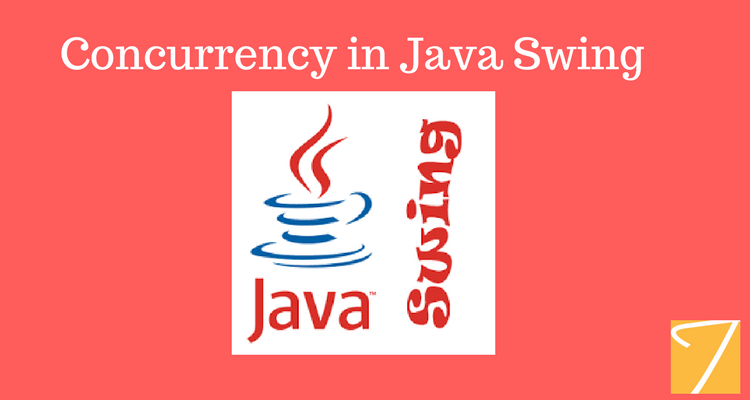 Uses of concurrency in Swing

The types of threads that Swing deals with are:

We do not need to explicitly provide code for creating these threads; Swing framework or run time provides them. We can just utilize these threads to create a responsive Swing program.

In Swing programming, initial threads create a Runnable object that initializes the GUI and schedules that object for execution on the Event Dispatch thread. If the GUI is once created, the program is mainly driven by GUI events.

An initial thread schedules the GUI creation task by invoking javax.swing.SwingUtilities.invokeLater or javax.swing.SwingUtilities.invokeAndWait. Both  these methods take a single argument; the Runnable defines the new task. invokeLater simply schedules the task and returns; invokeAndWait waits for the task to finish before returning.

Almost all code that creates or interacts with Swing components must run on the event dispatch thread. Swing Event handling code, runs on this special thread. Most code that invokes Swing methods also runs on this thread. This is needed because most Swing object methods are not ‘thread safe’. In API specification, some Swing component methods are labelled ‘thread safe’; these can be safely invoked from any thread. All other Swing component methods must be invoked from the event dispatch thread.

Code running on the event, dispatches thread as a series of short tasks. Most tasks are invocations of event-handling methods, such as ActionListener.actionPerformed. Other tasks can be scheduled by application code, using invokeLater or invokeAndWait. Tasks on the event dispatch thread must finish quickly; otherwise, unhandled events back up and the UI becomes unresponsive.

javax.swing.SwingUtilities.isEventDispatchThread is used to determine whether our code is running the event dispatch thread.

Important point to note: For each new background task, a new instance of javax.swing.SwingWorker is needed. The instances are not reusable.

All concrete subclasses of SwingWorker implement doInBackground; implementation of done is optional.

SwingWorker.cancel can be invoked to cancel a running background task. There are two ways we can do this.

java.util.concurrent.CancellationException is thrown, if get is invoked on a SwingWorker object after its background task has been cancelled.

Status methods report on the status of the background task.

Hope this blog gave you some basic ideas on Concurrency used in Swing. Thanks for reading!

An Introduction to Apache Kafka